Fluffer Nutter had been outdoors for some time before coming to Scruffy Paws in December of 2019. He had been out smarting his feeder and trapper for over a week BUT they didn’t give up and eventually got him!

Fluffer Nutter had some serious wounds and abscesses on his ears, completely matted, unaltered, and reeks of tom cat and infection.

Poor thing endured some nasty fighting. He was very nervous, but seemed tame. The veterinarian estimated him to be about 5 years old.

Fluffer Nutter was cleaned up, neutered, and adopted in January of 2020!

BUT! That’s ok! We welcome everyone back with open arms, which is exactly what we did when Fluffer returned. Fluffer’s adopter was heart broken

that he was not able to get along with her current cats. For the most part, he does fine but we think because he had to fight to survive he can become food agressive and he thinks all the cats are after him.

Fluffer was adopted a few short weeks later. He is going to be king of the castle

with his new mom as an only cat in the home! 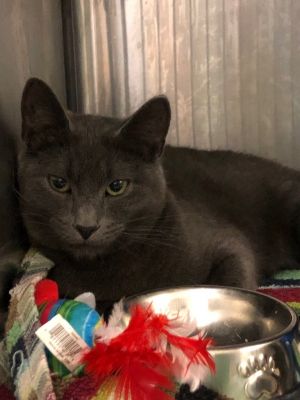 Meet Mickey, a 1 year old male kitty looking for his forever home. He is timid so she will need... View full description »