Please support our work in providing critical care to end suffering and save lives by contributing to the Dewey Fund.

About the Dewey Fund

As both a rescue operation and true no-kill shelter, part of Scruffy Paws’ core mission is to save cats and kittens from extremely difficult circumstances and give them a chance to live comfortable lives. The medical cost for animals in critical condition often runs into thousands of dollars over the standard cost of care for those who arrive healthy.

While social media fundraising often helps with individual cases, the need to fund all medical expenses often falls short leaving us with the painful decision to limit the number of cats we can help. The goal of the Dewey Fund is maintain an emergency and critical care fund substantial enough to assure that cases like Dewey and so many others will receive the care they need. No cat or kitten should suffer for lack of medical care.

The establishment of this fund came about just as we learned that our sweet Dewey was to become a hospice kitty. While we couldn’t save him we know that he did not continue to suffer from his injuries and perish alone. Dewey left this world knowing kindness, warmth and love.

Named in memory of Dewey, this fund will serve Scruffy Paws cats and kittens in need of extended or complex medical and/or hospice care. Like our Dewey, they all deserve the best care possible, and for those we cannot save, to at least feel love in their final hour.

Please help us help them.

Donate to the Dewey Fund today.

Check out some of the kitties saved by extensive medical care and the healing hands of the Scruffy Paws team on our Happy Tails page.

When he arrived at Scruffy Paws, it was hard to believe what we saw. With injuries from head to toe, including raw paw pads and a gaping wound on his hind quarter, Dewey was one of the worst cases we had seen. He was frightened, hurting, starving and defensive. However, he quickly learned to trust again and proved to be the most lovable boy who constantly wanted to be picked up and held.

Our shelter medical team worked for months to heal Dewey’s wounds and looked forward to the day when he would be ready to head off to a warm loving forever home. He was a shining star in everyone’s day at the shelter, and he was doing so well and feeling so much better until, one day, he stopped eating and began to rapidly lose weight. An x-ray showed a mass in his abdomen. He was immediately scheduled for surgery, but pre-surgical bloodwork showed such poor results it was felt he would not survive the procedure. How could this be? Hadn’t he been through enough? Our sweet Dewey, who we thought was destined to heal and live his life in a warm loving home, had suddenly become our hospice kitty.

It happened so fast. Our beautiful sweet, joyful Dewey left this world in the arms of the team who had so lovingly cared for him, leaving behind a trail of broken hearts.

We love and miss our Dewey and we know his gentle spirit will envelop all of those who will benefit from the fund named in his memory.

Please help us help them.

Donate to the Dewey Fund today. 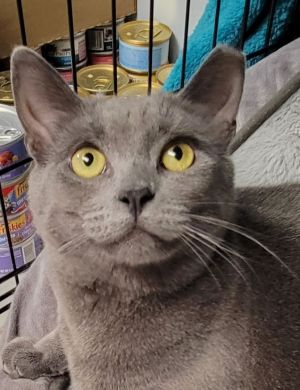 Hello friends! I am happy to introduce you to Coraline (grey and white) and Magnolia. They are just over 1... View full description »