Hercules had a rough start in life and came to us after eating part of a glove due to his extreme hunger outdoors. He had surgery to remove the glove, which we were unsure of his outcome considering his frail body but he was able to make a FULL recovery. Then he needed a second procedure to remove a polyp in his ear!

He lived up to his name and remained strong, recovering so quickly that he was soon able to be adopted by Robert!

Robert was waiting for his buddy to come home for over 1 month and half and has been checking in and anxiously awaiting the results of the polyp removal. We wanted to be sure Hercules was ready to go home after his second surgery to remove a polyp in his ear canal and he was stable on his urinary diet food, first. As if eating a glove the first time wasn’t enough! Thankfully, the polyp was found to be benign by the wonderful specialist, Dr. Clark with Dr. Rauch. When we received the results and told Robert that he was finally ready, he was so happy to finally be able to take home his new buddy. Robert, aka Fur Dad, is so happy to finally have his little buddy at home and Hercules is so happy to finally have his fur ever home where he has endless cuddles, food and catnip available! He will never be hungry again and will finally be a very spoiled kitty in a real home. 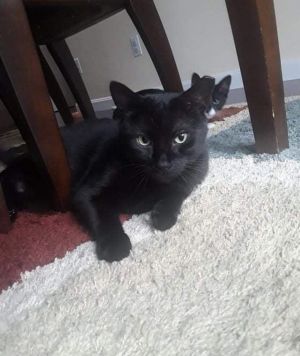 Baby was rescued from a hoarding situation along with 4 other kitties. “The Fab 5!” He was born inside but... View full description »