It was a phone call from our friends at Ocean State Veterinary Specialists – they had a beautiful sweet cat who sustained severe trauma to his leg from a vicious dog attack. The family was heartbroken, but could not afford the immediate invasive surgery and after care it would take to save his life.

Their choices were surrender Andre in hopes a rescue would step up for him or humanely euthanize him so the suffering would stop. They decided to surrender Andre to Ocean State and pray a hero would come along. Would we take him? A brief pause as we contemplated for half-a-second where the funds would come from for what could be some expensive vet work. Also a brief conversation with our shelter team to make sure everyone was on board for the care required after such an extreme procedure. Our shelter team didn’t think twice and said, “Absolutely!”

We called Ocean State back – Yes, we’ll take him.

One of our shelter managers left immediately to pick Andre up. We
couldn’t believe our eyes. This massive cat could not even fit in a carrier, so he was secured in a giant box! He was so handsome and sweet. He purred and growled at the same time from being in pain. Sadly, Andre’s leg was so severely damaged it had to be amputated. During his recovery he battled infection but, with treatment, healed well.

Our next task was to teach a 20 pound cat how to walk on three legs.
Sure enough, Andre, our gentle giant, caught on and began to bounce around like he had been a tripod for years.

Andre had a few other medical issues that would take time to resolve but, as luck would have it, found his new home with a veterinarian and the wonderful staff at Atlantic Animal Hospital & Wellness Center, who are all experts regarding special needs kitties. They LOVED Andre instantly! When their hospital cat passed away soon after Andre’s arrival, they reached out to us for a second kitty so Andre would have a companion, and adopted Zero (who was from a hoarding case). Andre and Zero greet all their clients and patients and serve as wonderful waiting room therapy cats.

Keep up the good work Andre and Zero! 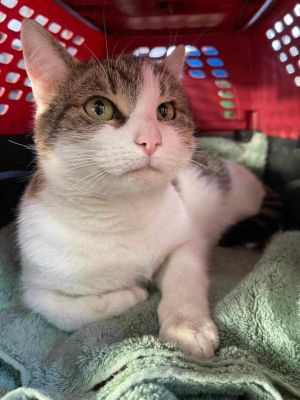 Josie is a super laid back 5 year old cat. She was found roaming the streets of Pawtucket alone and... View full description »